John Dos Passos' U.S.A. trilogy is a text particularly ripe for a digital treatment. No other work combines so many references to media with so little interpretive framing of this media (in Sartre's words, “the style of a statement to the Press"; 66). The U.S.A. trilogy style is not only removed and declarative, but patchworked; when asked what sort of plan he had for U.S.A. when he began writing it, Dos Passos replied:

I was trying to develop... the idea of montage. I had tried it out in Manhattan Transfer—using pieces of popular songs. By the time it evolved into such compartments as the camera eye of the U.S.A. trilogy it served a useful function—which in that case was to distill my subjective feelings about the incidents and people described. My hope was to achieve the objective approach of a Fielding, or a Flaubert... In the biographies, in the newsreels, and even the narrative, I aimed at total objectivity by giving conflicting views—using the camera eye as a safety valve for my own subjective feelings. It made objectivity in the rest of the book much easier. (Sanders)

The U.S.A. trilogy is thus a "montage" of media, of events, and of people. The novels combine the frequency of pop culture name-checking in Don DeLillo's White Noise with a popular consciousness long gone from living readers; the datedness of U.S.A.'s setting complicates an analog reading, but eases a digital presentation by placing most of its references in the public domain.

The goal for the Digital Dos Passos digital text is a site offering immersive engagement with the U.S.A. trilogy's media; photography, video, audio, digitized newspapers, and other historical 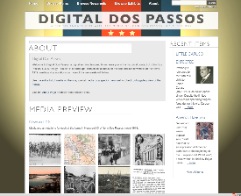 media, as well as short textual annotations, will alert readers to the events and people to which Dos Passos' media references point. I began my exploration of Dos Passos' use of media with the Newsreels in the trilogy's middle novel, 1919. The Newsreels' discrete references to the media vehicles of popular culture (conceivable as separate fragments or items) are free of both commentary and narrative framing, a characteristic making the Newsreels both the easiest section to annotate and (because of their lack of commentary) the section most in need of such a digital treatment.

In terms of what's next, I'll be spending the spring term focusing on design and theory: presenting papers and submitting articles on several aspects of the project (which is especially rich because of my trine interests in complex Modernist novels, hypertext theory, and web design), as well as improving the site's interface to make it a more immersive experience. I plan to resume adding content to the site this summer, possibly with the assistance of other interested graduate students.