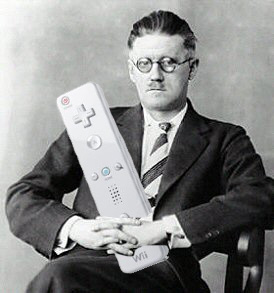 Matt Schneider presented an fun thought experiment on his blog* about a year ago: if someone created a Ulysses video game, what technics would we use to parallel the style peculiar to each section of the novel? For Proetus, Matt proposed "First Person Stream-of-consciousness, akin to that seen in Stout Games' IGF nominated Dinner Date"; for Ithaca, a "catechism based on Joseph Weizenbaum's classic ELIZA".

I'm a Ulysses nerd and both a game and textual studies scholar, so I had to jump into the thought experiment. The following are the ideas I've come up with (some of them I brainstormed during a "Literary ARG" session I led at THATCamp Games):

It was time to pull these back here form the comments on Matt's blog, because on Wednesday I'll be expanding on the idea with a "Anachronistic Linati Schema" lesson plan for teaching Ulysses. I'll be substitute-teaching for Professor Brian Richardson's English 428 undergraduate seminar on Ulysses, and since we'll be discussing the "Hades" section (right before THE INELUCTABLE HEADLINES of Aeolus), we're at a good point to stand back and think about how the less-obvious style changes we've encountered so far are both responding to and shaping the narrative. The plan is to share these videogame ideas, then have students choose a media category with which they're familiar (music, movies, books--or even better would be individual games within genres, or subgenres within genres). After putting these up on a grid together, we'll look for similarities among the choices. I'll report back on Wednesday with what we find!