(Cross-posted from the Technoromanticism seminar blog.) 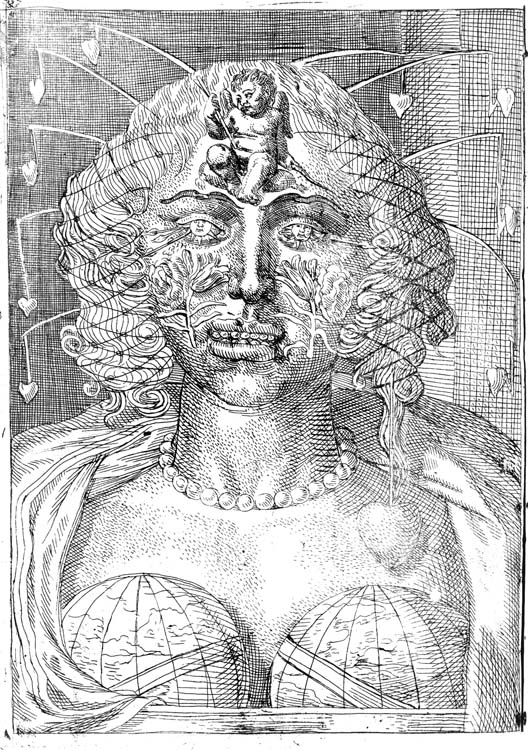 "Metaphors will be called home for good. There will be no more likeness, only identity."

Some interrelated thoughts on cyborgs/metaphors/prosthetics. Shelley Jackson's Patchwork Girl quotes Shakespeare's Sonnet 130 (“my mistress’ eyes are nothing like the sun”), bringing into a work already quite aware of the mimicries between body and text the idea of blason, the style of poetry that praises but pieces individual pieces of the loved one's anatomy through metaphor ("she goes on"). Ever since I encountered the etching above, with its parodic response to such blason conceits as eyes like suns darting rays, cheeks like roses, and teeth like pearls, I've been unable to read that form of poetry as intended (i.e. describing a harmonious whole); the etching questions whether we can fashion the ideal from constituent ideals. Victor Frankenstein describes his Creature as an almost-functional blason figure ("I had selected his features as beautiful"), but precedes this claim by admitting another qualifier on his choices for materials: "His limbs were in proportion". As with the etching, the Creature's monstrosity comes partly from the failure of these parts, beautiful and proportionate as they may be, to coexist.

I've been thinking about extending these questions of the harmony and juxtaposition of parts of a whole (text/body) to prosthetics, whether these prosthetics are more metaphorical (e.g. prosthetics of memory) or physical additions like our cyborg mobile devices. When my group was developing a Cyborg's Definition of "Women", we identified "that species" as a group that faced extinction after failing to make use of certain prosthetics/tools; for Wollestonecraft, the tool in question was education. Success through the use of prosthetics was a mark of cyborghood.

With the addition of prosthetics, we're facing (as with blason) the juxtaposition of disparate parts--except in this case, the metaphors by which we're extending our bodies aren't pulling us apart into unbalanced monsters. Certainly they can go either way, but I'm seeing a pattern where metaphors applied onto figures can create monsters like the one in the etching, and metaphors growing out of or chosen by a figure have greater harmony and utility. Perhaps prosthetics are a way of marking these piece-making bodily metaphors not as even more-idealized (and thus less utilizable?) objects, but as tools defined by their individual uses and qualities? I'd be interested in listing and comparing the Creature's bodily parts with the Patchwork Girl's; given their gender difference, it's interesting to see the Creature's parts as typical of blason inutility (lustrous black hair!) while the Patchwork Girl's parts are defined (sometimes indirectly via anecdote) by their abilities to dance, dissemble, act.

DH Tools. I'd intended to write my next Technoromanticism seminar blog post as a follow-up on my discussion of DH tools, using a few of these tools to ask questions about Frankenstein while pointing out the limits and specifics of what the digital tools' answers actually say. I didn't get around to that... but I thought I'd share some tips for distant reading work I've used with my English 295 students: