View DHQ: Getting Started with Gephi for DH Vis (Part II of II)

View the site related to this post: digitalliterature.net/viewDHQ. Huge thanks to the ACH for funding this work!

In the first part of this blog post, I discussed the results of a small visualization project funded by a 2012 ACH Microgrant: visualizing the flow of DH knowledge as captured by citation networks and other measures from Digital Humanities Quarterly (DHQ). You can view some of the products of the project here, read more about the initial proposal here, or jump back to Part One of this post to read more about the project's outcome. Now, I'll discuss some of the technical details of creating DH visualizations...

Getting Started with Gephi

Beta. Gephi is free, open-source visualization software for Mac, Windows, and Linux available from Gephi.org. Its beta status (currently 0.8.1-beta) meant I periodically ran into some small bugs (usually fixed by deleting the user library and reinstalling); the largest beta-style issue was that visualization images weren't exporting as editable files (e.g. SVGs), meaning I couldn't put on any final touches to the images using design software like Adobe Illustrator.

Basic Terminology. Outside these minor issues, I found it quite easy to start making basic visualizations with Gephi. As I began working with various datasets, I found my workflow fell into two parts:

Gephi can handle complex data--e.g. a dynamic stream of Twitter hashtag results--but a dataset can also be a ridiculously simple thing, so this article will assume we're all working with some pretty basic sets of data. Some quick terminology might help:

For the visualizations with DHQ and with Ulysses I've worked on recently, my datasets have largely been two- or three-column spreadsheets showing the relationship between a pair of items, plus sometimes a weight (i.e. some quantified measure of that relationship such as number of times a pair of characters meet). For the Ulysses "Wandering Rocks" visualization, we simply had one column for the "source" (the node for a person leading the interaction) and one column for the "target" (the focus of that interaction). Thus, one row in a general Ulysses interaction dataset might have a source cell saying "Bloom" and a target cell saying "Molly", to record a social interaction where the character Bloom spoke to Molly. Make sure that any nodes (your characters, articles, objects, etc.) that are mentioned multiple times within a dataset are always identified in the same way with the exact same spelling so that Gephi can identify each mention as referring to the same thing (e.g. we always referred to one character as Fr. Conmee, never sometimes as Father Conmee).

A snapshot of part of the super-basic dataset spreadsheet for the "Wandering Rocks" visualization.

For the first three DHQ visualizations, I had "source", "target", and "weight" columns, where each row recorded data about one DHQ article (the source), one of the articles in its bibliography (the target), and a weight for that edge (we decided to weigh edges by the number of times an item in an article's bibliography was explicitly cited in the main text of that article).

Once you've set up a dataset (and there are other ways to do this, but for a simple dataset, importing a spreadsheet as a CSV is probably the easiest)--you're ready to check out your data in Gephi. Fire up the program and note the three main area tabs at the top of the interface: 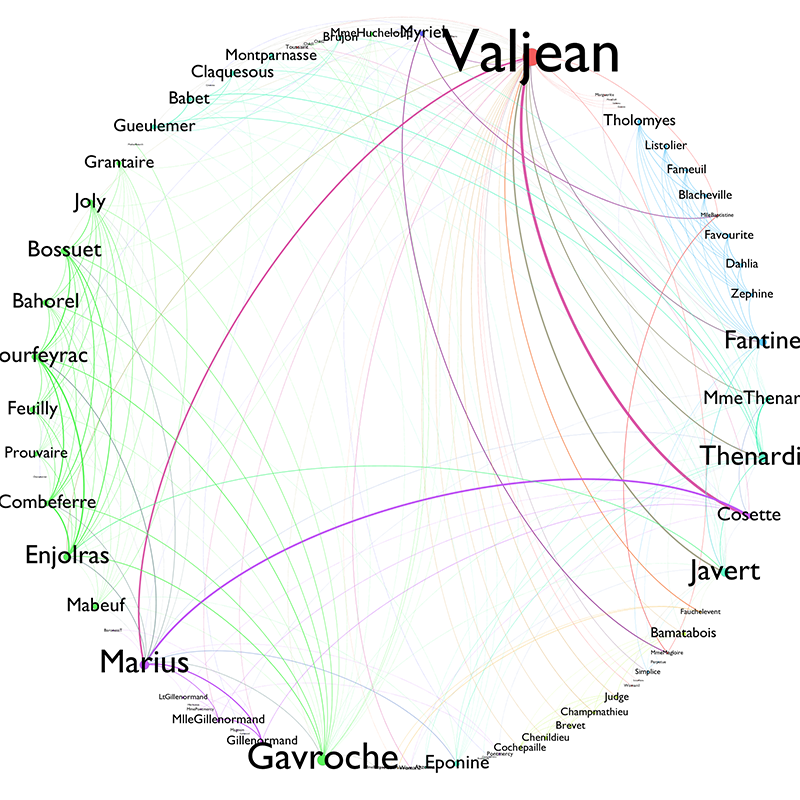 A quick visualization of character relations in the Gephi Les Miserables dataset.

The best way to learn Gephi is to import a dataset with which you're familiar; if you don't currently have one of your own, try opening the one of Gephi's example datasets that is most familiar to you (perhaps it's the connections between characters in Victor Hugo's novel Les Miserables, or a network of nearly all (?) the Marvel superheroes). I'll cover a few of the many buttons and widgets below, but the best way to learn is probably to

Gephi maintains a forum and a wiki that probably hold answers to most of your basic questions; also check out the list of Gephi plugins, which add functionalities such as embedding zoomable visualizations in your web page and pulling data from Twitter.

Once you've got your dataset imported and you're on the Overview pane: