THATCamp Prime 2012 happened to fall on Bloomsday last year, so a bunch of us—Ben Schmidt, Chad Rutkowski, Anastasia Salter, Heather Prescott, and me (Amanda Visconti)—jumpstarted a small infoviz project: a visualization of character interactions in James Joyce's Ulysses. In keeping with the spirit of Molly Bloom, we said "O rocks! Tell it to us in plain images"--creating a way to see at a glance which characters are most social, who interacts with whom, and what type of interactions different characters have throughout the course of the Dublin day. We ended up producing a basic visualization of character interactions in the "Wandering Rocks" section. 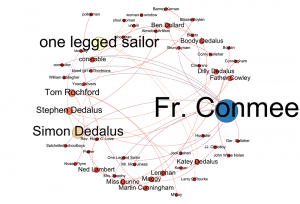 For this year's Bloomsday (Sunday, June 16th, 2013), I'm gauging interest in helping expand our visualization to other pieces of the book: i I'll write up an easy-to-follow tutorial and assign participants small sections of the book to cover (I'm happy to let people indicate a section of interest, of course--but with a number of people working together, my assigning pieces will help us a) not do redundant work and b) produce data that covers complete sections of the novel instead of random pieces with large gaps in-between (and a visualization is more intuitive and useful if we can say "this shows character interactions in chapter 1-4" instead of "character interactions on pages 22-37, 56-61, ...."). I'll keep an updated list of unclaimed sections, too, in case anyone feels inspired to do extra work :) ).

What's involved? It's super easy--no knowledge of information visualization is required to participate, and although a basic familiarity with Ulysses (i.e. having read the section you're working on once before) will make your work a bit faster because you can scan the pages for people interacting instead of read them, it's fine if you're reading Ulysses for the first time (welcome to awesomeness--and I'll have something neat for you to check out in the fall! (One of my digital dissertation coding projects is building a participatory digital edition interface for Ulysses aimed at a helpful, customized reading experience for first-time readers of the novel. Tweet me @literature_geek to be added to the list of future beta-testers!) ).

The work is super simple: you'll fill in a spreadsheet each time two characters have some sort of interaction (i.e. every time two characters run into each other--not every sentence spoken in a dialogue), taking down the names of each pair of characters and the type of interaction they have (we've got codes for seven somewhat arbitrary types of interaction, from 1 "character is thinking of another character" to 7 "character having intimate contact with another character"). I'll create a tutorial blog post and/or video before Bloomsday that walks you through what to do, and I'll drop everyone's work into an information visualization program to produce the visualization. As a gauge for the amount of information you'll be taking down, the "Wandering Rocks" section--possibly the most interaction-intense section of the book except for "Circe"--had 43 interactions by our count. If you're just scanning the pages for character interactions instead of reading, you can spend as little as 10-20 minutes covering a section of the book.

Interested (I might make awesome laptop stickers for participants...!)? Fill out the Google form below. There's a space to ask questions if you have any. Thanks!