For my Infinite Ulysses participatory edition, I’m building a digital edition interface that allows site visitors to create and interact with a potentially high number of annotations and interpretations of Joyce's novel. 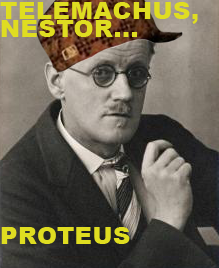 Reddit isn't all memes, but here: Hey, this book isn't that difficul--oh.

StackExchange is a group of Q&A sites that match experts up with questions in a specific field of knowledge--originally computing questions, but now a diverse range of specialties including Drupal, cooking, and English language usage.

I've blogged about academically useful corners of Reddit previously; I'll add another fascinating subreddit to the list for anyone seeking quality content on the site: Theory of Reddit (r/theoryofreddit), a space for assessing how the entire community is functioning, whether that's

Theory of Reddit is a moderated/curated subreddit that defines itself as "a mildly navel-gazing space for inquiring into what makes Reddit communities work and what we in a community can do to help make it better"--in other words, an online community talking about being an online community, with the best discussion promoted to the top.

Besides the abstract use of such online community meta-cognition for participatory digital edition developers, Theory of Reddit and StackExchange have been useful in planning some specific features for Infinite Ulysses:

1. A tool becomes how its community uses it. At least partially, the usage of an online community develops organically: another fine reason for user testing and a readiness to adapt as the user community grows and changes over time. I'm fascinated with Reddit's unintentional awarding of high-visibility platforms to people who provide highly upvoted content. Users are able to edit posts after posting them; posts that make the front page (i.e. get enough upvotes to be seen by a huge number of site visitors) will usually get a small addendum on the text of the post to the effect of "wow, I made the front page"--but there's the potential (sometimes embraced) to use that editing power to expose a large number of readers to your thoughts on any subject (e.g. political activism). I like that providers of "good" content (for some meaning of good) are rewarded with more viewers; I also like the reminder that people will use a site the way that makes sense to them, oftentimes the way that is most convenient.

Although I initially anticipated Infinite Ulysses as a place where people would add contextual annotations to the novel, I quickly realized that many readers would use the annotation field to ask questions or simply mark things they don't understand. It's probably going to happen; I can't prevent it, and I wouldn't want to stop it. To build toward that realistic site usage--acknowledging that to read a difficult book is to have questions as well as answers!--I'll borrow a feature from the StackExchange sites, which provide a list of unanswered questions on the site (which you can also pull into your RSS feed). This way, Joyce junkies with a few spare minutes over lunch can pull up a question or two to answer, and I can identify points in the text in need of thicker annotation. I'll also be able to remove the questions/notes marking non-comprehension so that they don't clog the view of annotations with content, but I think it would also be useful and encouraging to first-time readers to leave some sort of simple sign behind to show that others struggled with the same point in the novel (perhaps a small icon, or a filter you can turn on to see highlighted text where questions were raised).

2. Choosing what to show near the top of a list of comments/annotation/tags isn't as easy as it seems. Reddit suffers from a problem of the quickest comments on a post often getting the most upvotes, while later good comments get lost far down the page because readers don't read far enough to assess them. Kaj Magnus Lindberg has a great post on this problem, where he advocates sorting not by upvotes only, but by upvotes divided by some measure of how much attention a post has received (views or time since the comment was posted). A similar issue crops up with the question of tagging annotations to allow filtering and toggling: do I define a limited vocabulary that readers can use, or allow users to create new tags? If I choose the latter, how do I deal with similar tags, misspellings, and variants? Even if I put an auto-complete option on the tagging field, the number of possible tags might become so staggering that most tags see little use, and different tagging words are created to basically tag the same thing. With both the questions of sorting comments (i.e. annotations) and wrangling tags, I'll be reading up on how other online communities have handled the problems, and I also expect to make changes to the site after I see how real users interact with these options.

3. Reputation is established by your activity on the site. To reduce the load of work on moderators, StackExchange has tiered ranges of "reputation" points awarded for different activities on the site; new users start with a reduced number of capabilities that expand the more they contribute. This 2009 post on how StackExchange handles moderation emphasizes that abilities and "rep" are gained through active participation and providing content that others deem useful: "Reputation is a (very) rough measurement of how much the Stack Overflow community trusts you. Reputation is never given, it is earned by convincing other Stack Overflow users that you know what you’re talking about." With this tiered system plus giving users the ability to flag problematic content for moderator consideration, users are both able to establish credibility and reduce the load of human moderation work. I'm not sure that I'd use a similar system on Infinite Ulysses; I want to attract a diverse array of Joycean experience to the site, but I worry about creating any bar to participation or hierarchy of who's most valuable to the site. At the same time, I know that some reward for frequent contributions (a weekly top contributers? top question-answerers?) at least makes me more excited about contributing regularly to such a site. I'll definitely at least keep private tabs on frequent contributors and try to highlight their work, perhaps by posting curated sets of their annotations on the front of the site on some rotational basis.

I successfully defended my digital humanities doctoral dissertation in Spring 2015. The now-available Infinite Ulysses social+digital reading platform is part of that project; come read with us!